Sometimes projects don’t turn out the way you expect them to.

In April 2011, I was hired to record tuba on an alt-rock song for a Church music director, and I was excited about being asked to replace the electric bass part with tuba. After all, it’s my ModernTuba mission to play tuba on songs that don’t usually contain it, like pop, funk, jazz, and even, as in this case, U2-esque Christian rock, even though I’m not religious. Since I had been recommended to the project by a friend, I felt pretty comfortable accepting the gig. It ended up being a somewhat strange experience. The music director wanted soft textures with long sustained notes in the chorus sections. He sent over an unfinished recording of the song with a lead sheet that had all the wrong chords (the guitar part was probably played with a capo).  It sounded good, very professional and I transposed the chords and worked out a part. It was two months before I heard from him again, but we finally chatted and set a date to record. When I arrived, the session was set up in the living room of the album’s producer. We’re not talking a swank studio in the lap of luxury, though—it was more of a cookie cutter apartment in a large 4-floor apartment complex. The producer/engineer was alone, having moved his dog to the bedroom for the occasion, and I sat on the edge of a cushy ottoman to play my part into the microphone that was carefully positioned overhead. Do-It-Yourself production is usually a good experience that really engages the passions of the people involved, and as soon as I was assured that I could get away with playing as loudly as I wanted without regard to the neighbors above or next door, I was ready to go for it. We had a window of about ninety minutes before his wife would be home, so, mindful of the time, we began to record. After an hour, we had recorded some lush textures in which I had doubled my part and also played harmony lines to fill out the sound. Upon playback, the unmixed tracks sounded rather good against the backdrop of guitar, drums, synthesizers, and processed vocals. Feeling pleased with the results, he moved back the mic, thanked me, and closed down the session as I packed up my instrument. And then he exclaimed, “Oh no! I accidentally quit the session without saving it!” Umm, doesn’t Pro Tools usually auto-save? Isn’t it in a backup folder somewhere? He didn’t know. He didn’t know if it was possible to get it back; and if it was possible, he didn’t know how to do it. I certainly didn’t know anything about it. We did it again. This time, we had twenty minutes to get it right, so it was a bit of a rush job. He set up the mic, hoping it was in the same relative position as before, and we used first takes only. I felt pretty assured that I nailed each layer but still offered to come back another time, at no extra charge, if need be. Aside from receiving my check, I heard nothing after the session. Days turned into months. Months turned into a year. Not every recording session I play on will end up being used or even used the way I expect it to be. I was compensated for the job, did my part, and wished the project well. I never did meet the music director or anyone else involved. Then today, while doing a search for something else, I came across a Bandcamp page that had my name on it. The link turned out to be this very project, under a band name I’d never heard before, and there was the song in question. The album was released this past April, and, sure enough, it included my credit for playing the tuba. Eager to hear how it turned out, I listened to the song on my headphones. Twice. It sounded high-quality and had a great groove. In fact, the entire album sounded great— a real U2-esque triumph in honor of their faith. That said, the tuba part had been replaced by an electric bass. As Kurt Vonnegut would say, “So it goes.” 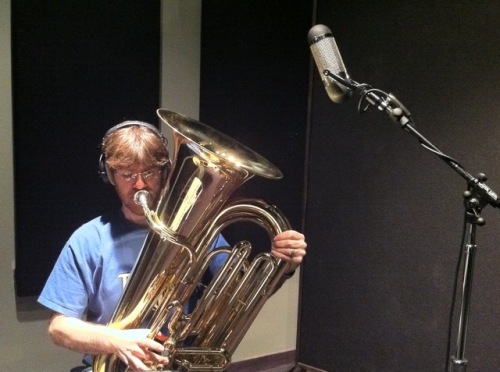 Picture from a recording session with a different band.
Photo by Melissa Axel.