Every wedding deserves to be crashed by a group chaotically playing DIxieland music as they march unexpectedly around the reception hall.

I humbly submit the following as the ModernTuba Video of the Week!

I don’t know why this exists, but cutting edge topical humor and the beauteous tones of tuba combine here to remind us there are YouTube videos other than Rebecca Black’s “Friday” video. Having said that, I humbly submit the following as the ModernTuba Video of the Week! (May the universe have mercy on your poor soul.)

Bonus points given for the Price Is Right effect at the very end.

For those of you who missed the memo, St. Patrick’s Day is the 17th of March every year, not last Saturday and Sunday as you might’ve thought given by how many people pranced around in green, attended parades, and drank green things at local pubs. I don’t think the world is ready for a week-long celebration of all things Irish when that celebration seems focused on giving folks the excuse to get smashed on beer and act obnoxious in the streets.

Having said that, I’d like to honor my Irish roots (of which I am approximately one-quarter) by submitting the following video as the ModernTuba Video of the Week! The sound on this one is a bit low, so you’ll have to turn your volume up, I’m afraid.

I hope you enjoyed listening to Ben Roundtree playing Hornpipe for Tuba and Strings as much as I did, especially since the audience seemed entirely uninterested. Then again, I was almost two minutes into the video before I noticed they were all signing to one another.

Just returned last week from attending the Durango Songwriter’s Expo in Santa Ynez Valley, California (just N of Santa Barbara). At this expo, 150-200 songwriters gather together to mingle with each other, network with industry professionals and get direct feedback on material, write more songs, jam endlessly into the wee hours, and perform in front of the group if chosen for a showcase slot.

The DSE is held twice annually, once in California during February and again outside of Denver in October. This was the fourth in a row that Melissa Axel and I have attended, and it was the best one yet.

What exactly does a tuba player do at a songwriter’s expo? Well, play tuba, of course!

Apart from playing the kick-off party open mic the night before the expo began, Melissa was also chosen for a showcase performance during the opening night festivities. We played her song “The Worth Of Things,” which went over quite well—happy to have had the opportunity! It’s always an interesting experience for me when I play into a mic, but the sound in the room was great. (For lack of a piano, she was relegated to playing on a weighted keyboard. If only they’d move the lobby piano into the hall and onto the stage!)

The second night, singer-songwriter Andy Ard asked fellow musician Tage Plantell and me to sit in for his showcase performance, and the three of us had a hoot playing Andy’s “Here Comes Another Good Time” to the audience. He’s also asked me to play on this song when he records it later this year. 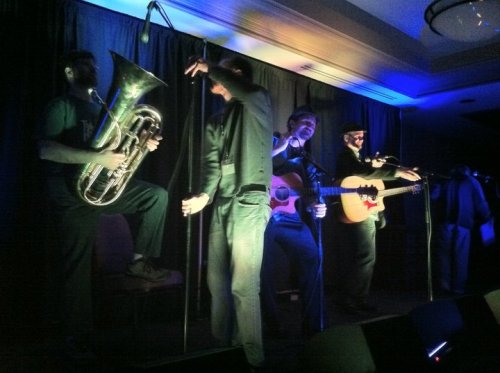 After the showcases there’s an open mic which we’d wander in and out of. In addition, there were plenty of impromptu jams in the resort lobby, as well as packed song circles in crowded hotel rooms. The advantage to being the only tuba player at an expo overrun by guitarist singer/songwriters is that they are usually more than happy to have a tubist sit in and play with them. (Special props to Ron Gozzo who brought out his sax!) 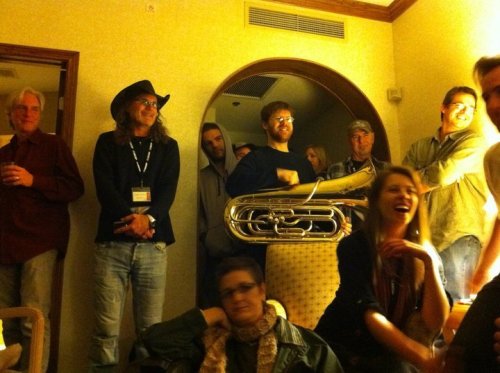 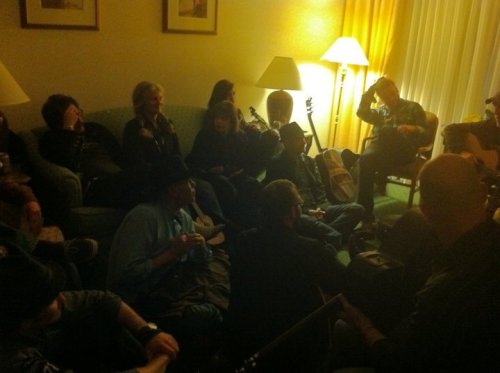 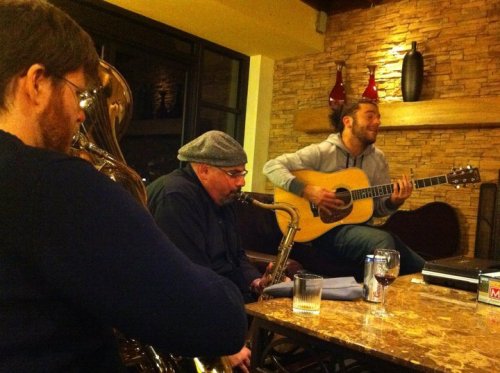 Ultimately, the driving force of the expo is the listening session: basically, twenty or so songwriters sit in a room, each plays a demo or finished recording of a song for a couple of industry professionals, and everyone takes note of their feedback and suggestions (pictured below). Pros come in all shapes and sizes, but many of them are music supervisors, label execs, successful hit songwriters, publishers, and management. This time, we were sharing nearly completed recordings from Melissa Axel’s debut album, and it was exciting to see a lot of these folks really impressed with the songs. There are also panel discussions on various music industry topics, and we attended the ones on Film & TV Placement (pictured below) and DIY. 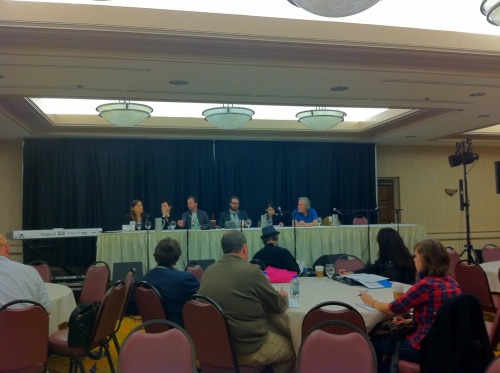 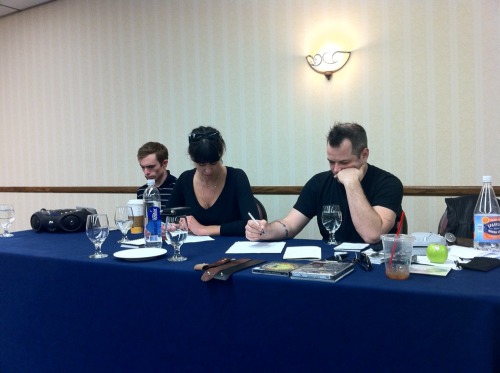 Overall, we had a great time seeing old friends and making new ones. Can’t wait for the next one this October!

Back by popular demand (and over a week's worth of travel), it's time for the ModernTuba Video of the Week!

This week we feature a clip from The Price Is Right during which host Drew Carey proudly declares, "If you want to start the party up with some models … play some tuba music!" I hereby submit the following as the ModernTuba video of the week!

To celebrate the release of the new Lady Gaga single “Born This Way” I hereby submit the following as the ModernTuba video of the week! (Also, I appreciate that he decided not to use “Tuba Weekly” and steal my thunder!)

In an effort to promote the true ModernTuba spirit of using the tuba in interesting and creative new ways, I hereby submit the following as the ModernTuba video of the week:

For the last nine months, I have been deep into recording Melissa Axel‘s debut record. I’ve participated as a tuba player, as a co-writer on a song (for which I also sang background vocals), as a production assistant, as an executive producer, and [very briefly] as an assistant engineer.

It has been one of the greatest experiences of my life.
On Friday we finally wrapped up the recording, and this week it is being mixed. Needless to say, I’m pretty excited about it! We are just weeks away from the final product (and vinyl will be on its way). The album has gorgeous vocals and beautiful piano, sweeping strings, rockin’ tunes, intimate songs, epic productions, delicate cello and tuba, and many other amazingly creative arrangements.
I thought it would be fun to post a few videos from the sessions to whet the appetites of anyone following this tublog, so enjoy!
Here’s video of our strings recording, featuring Kailin Yong (Kailin Yong Peace Project) on first fiddle, Tom Hagerman (DeVotchKa) on second violin, Mackenzie Gault (Flobots) on viola, Beth Rosbach (Fort Collins Symphony Orchestra) on cello, and Mike Fitzmaurice (Colcannon) on double bass.
This video starts out as a silly tour of Macy Sound Studios in Denver where piano and rhythm section were tracked, and it ends with Melissa rehearsing the instrumental track “Sharper Side” while producer Justin Peacock of The Hook Factory adjusts microphones.
And finally, here’s footage of us recording the song “Every Place Is Home” at Evergroove Studios in Evergreen, CO. The bloke on 12-strings is Irish songwriter Andy White—an incredible writer and performer who has written with such greats as Peter Gabriel, Tim Finn, and Sinead O’ Connor. Andy co-wrote this song with Melissa and me at the WOMAD summer school in Bath, England a couple of summers ago.
More to come, so stay tuned!

—Captain Kirk, from Star Trek II: The Wrath of Khan.

I’ve been a fan of science fiction since childhood. As a kid, there was no adventure more thrilling than a Star Wars movie or a television show like [the original] Battlestar Galactica.

But equal to that excitement was the thrill of sci-fi becoming reality before my young eyes. Astronauts were already able to go to the moon and back, satellites were being launched to voyage to the deepest parts of our solar system, and special spaceship “shuttles” were bringing travelers into space like airplanes.

As a child in Florida, this was especially amazing. I could actually go to Cape Canaveral and witness this for myself if I wanted to. I watched every flight eagerly, shuttle launch after shuttle launch on cable television, a tiny bit of my dreams coming true every time it blasted off.

And then one day in 1986, the space shuttle Challenger exploded across the skies.

It was as though part of me shattered right alongside it, my dreams and hopes of the future scatter-shot against the cosmos. From outside my elementary school classroom I could see the distant trails of smoke, and suddenly it was all very real to me. The fantasy was deflated; my heart was broken. I couldn’t possibly recover.

Don’t laugh, but this makes me think of ’80s television icon Punky Brewster. 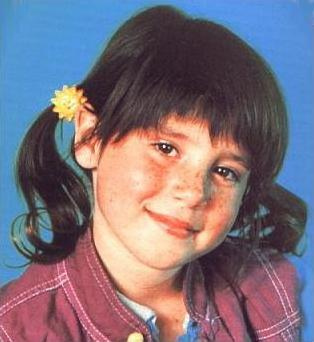 You see, there was this episode of Punky Brewster that did the wonderful job of bringing me some kind of closure. It began pre-Challenger when Punky’s class is having career day with students dressing up as the occupation they want when they are older. Punky comes to class dressed as an astronaut, and the entire class is abuzz with excitement.

Then days later, the explosion happens. The class is scared and distraught, & the teacher sits them in a circle to talk have them about their feelings. It was as though the writers reached right into my broken heart and put on-screen every devastating thing I had been feeling about the accident. A crestfallen Punky, called crazy for still wanting to be an astronaut, ponders giving up on her dream.

But when her teacher brings Apollo astronaut Buzz Aldrin to speak with her about the courage of the Challenger crew, Punky’s dreams come roaring back to life. The next day, I think every kid in my class came to school wanting to be an astronaut. And so did I. 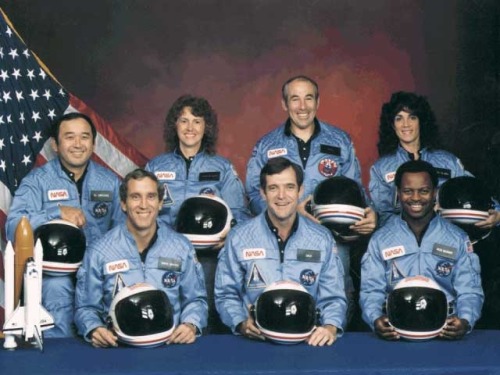 Now obviously, I never became an astronaut—but I did learn the important lesson to never abandon your aspirations just because of a setback, and I realized that every day and every action has not only its risks, but its potential for adventure as well.

So I ask: when faced with disaster, do you stand back, paralyzed by fear? or do you step boldly forward and embrace the pure potentiality of the unknown?

It can be a real struggle, absolutely—but today, on the 25th anniversary of the Challenger explosion, I am reminded of an imaginative little boy in South Florida, one of his favorite television characters, and of the seven dreamers who achieved immortality amongst the stars.

Without our dreams, who are we really?

In an effort to promote the true ModernTuba spirit of using the tuba in interesting and creative new ways, I hereby submit the following as the ModernTuba video of the week: